In 1981, I started a new career in visual art. After some experiences in ceramics, I made a series of monumental, painted reliefs in plaster entitled "Reflection". The subject of one of the reliefs was the First World War (1987). In 1991, I started practical training in the silversmith's trade in the workshop of Anke AMO Akerboom. This lady is a famous artist and has always been my technical and artistic coach. Initially, I only created jewellery. In 1994 and 1996, I took part in a group exhibition with some fellow jewellers. 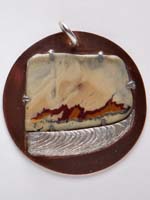 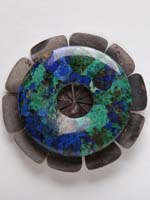 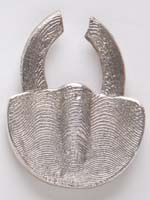 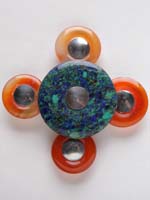 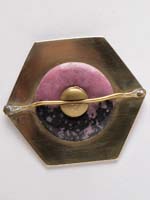 After a few years, I switched to making what I call "mural jewellery": copper and silver objets d'art, without the functional restrictions of body jewellery and inspired by nature. In 1994, I only made one depiction of the First World War: a triptych called "No man's land". 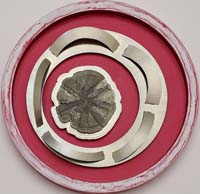 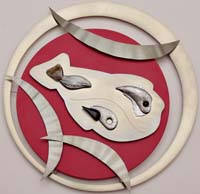 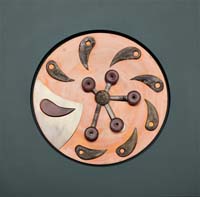 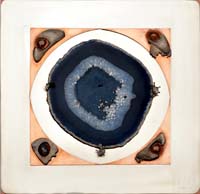 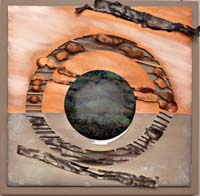 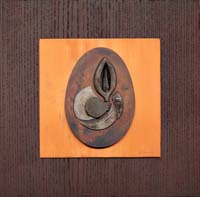 Throughout these years, the First World War fascinated me. In my opinion, this war has always remained a mystery. Every testimony was used to gain better and deeper insight into the question "Why". In 2002, I became a member of the WFA (Western Front Association), a British club of people interested in the 14/18 period, which has branches in both Belgium as well as the Netherlands. That way, I wished to share my passion with other people. Until 2003, I did nothing but read about that particular war, look at photographs, visit exhibitions and war museums, attend lectures, and so on. In other words, everything I did was in fact passive and without any intention of realising anything using the knowledge that I acquired.

The great turnaround in my life took place as a result of a poem by Herman de Coninck, entitled "A Trench Raid near Hooge". This touching poem contains many images and metaphors (such as the sun, fingers, eyes and sunrise), which were useable as materials for a piece of mural jewellery. I even experienced the euphoric sensation that this visual poem had been written especially for the purpose of being illustrated in my particular way. Therefore, I created six pieces for the six stanzas. Next, I created five more copper reliefs as illustrations for British poetry: Robert Graves (a kind of chessboard), Edmund Blunden (another poem about a nocturnal landscape at war) and Wilfred Owen (burnt-offering). Isaac Rosenberg through his poem, 'Break of Day in the Trenches', inspired me to create a huge rat made up of barbed-wire called "Taratien". The old triptych made in 1994 could, after reinterpretation, be considered as an illustration of a poem by Alec Waugh. These 11 objects together form "English War Poetry".

As a result of the poem by Wilfred Owen "The Parable of the Old Man and the Young", I became aware of the strong bond between the Great War and biblical themes. Subject of this poem is the story of Abraham, who is obliged to sacrifice his son, Isaac. Ultimately, Abraham is released from this gruesome sacrifice. As opposed to the generals in the First World War, who just continued to sacrifice their soldiers.

As far as the soldier in 14/18 was concerned, the main story had to be the Passion of Jesus. Its influence has been repeatedly confirmed by testimonies and in literature. This school of thought as well as being inspired by different Flemish painters (Memling, Rubens, Van der Weyden) photographers such as Fernande Kuypers of Bocholt and Bettina Rheims, two members of the Young British Artists (Damien Hirst and Sarah Lucas) as well as many other artists, gave me the idea for creating a "Passion of the Soldier 14/18". Modern interpretations of the Way of the Cross convinced me that the strict, archaic, ecclesiastical conventions should be regarded as a challenge. In the period 2004-2005, I was devoted entirely to the creation of the transposition of the cross stations into the tragedy of the First World War.

After this large Passion project, I created another series of copper reliefs, expressing aspects of the Great War: "Propaganda", "Undermining", "Stepping stones" and "Resentment".